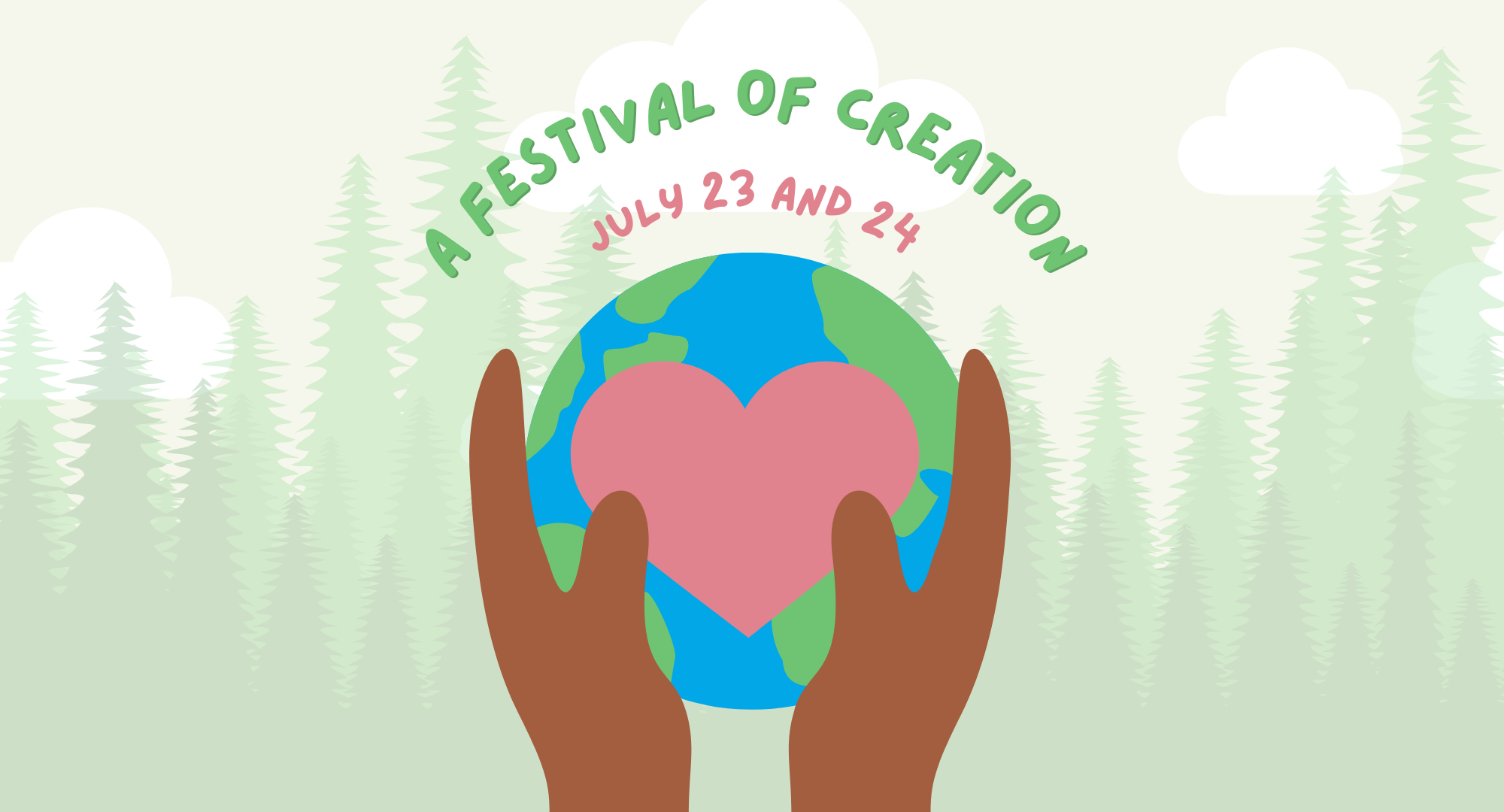 Last year when we didn’t feel comfortable hosting people inside our buildings yet, we were looking for a totally-outdoor VBS alternative that could involve people of all ages and could be directed to supporting creation care. What was born was the Festival of Creation, a 2 day festival celebrating the Earth and all that is within it. I’ll include everything we did, but also will include all of the ideas that didn’t end up happening because they might work out for some of you.

What we wanted, first and foremost, was for this event to be an absolute blast. Every activity needed to have an element of fun and whimsy to it in order to keep the tone light but focused. In addition to that, each part needed to have a continuing action attached to it, to keep the people focused on next steps in creation care. A particular eye was turned to climate change and environmental justice – with hope for change and steps for living a more environmentally just life. Wherever possible, we involved relevant experts to make sure the focus is more on effecting systems change rather than just individual changes, but left lots of room for individual changes too.

For both days, there was a period of structured and unstructured activity. During unstructured time, people were free to pray using the multisensory prayer stations that I put together, or to talk with the various vendors and presenters I invited, or to grab some food from the food truck or snow cone machine.

On Day 1, In the Garden, our structured time involved a presentation from the local community garden’s director on vermiculture. We created compost using worms, which was a huge hit with kids and adults. I presented a lesson from Cynthia Coe’s book Earth Our Garden Home which ties the practice of composting to the theological concept of resurrection.

We heard a presentation from the Unnatural Resources Institute, which is headed by a St. Tim’s parishioner. Their mission is to get people thinking about ways to reuse things instead of throwing things away, and there is an annual competition for reusing refuse to create robotics, art, and useable items.

On Day 2, The Waters, our structured time involved three presentations by Sound Rivers from our local river keeper Jillian Howell. Our first activity was to test the water quality of our church and surrounding area. We tested the tap water, outdoor fountain, baptismal font, drainage ditch, and river. We were a little worried about the results, but we were proud to say that there was no E. Coli found in any of these sources! Jillian showd how the tests are performed, and we got to view both clean and tainted samples, which glow under UV light. The second presentation was called a “trash audit.” In the morning of the event, Jillian went down to the river with a bag and picked up any refuse she found in the water or on the bank of the river. She dumped it out, and we all put on gloves and sorted through it and talked about how each item can harm local wildlife or adversely affect waterquality. The third activity was a runoff simulation using large sheets of paper, washable markers, and water. We would draw on the paper with different colors to represent different kinds of material. For example, farmland was green and represented pesticides and fertilizer and other chemicals. We used red for animal farming, their waste is known to enter rivers. We used purple to represent construction, where dirt is kicked up and piles of dirt, mulch, and other materials wash away in the rain. Then we crumpled the pages up, flattened them back out some, and slowly poured water over them. The ”rivers” that formed on the page showed exactly how these hazardous materials enter the rivers.

We had an additional presentation by RAW Plastics. Our city does not actually recycle much of the plastic it collects, it is transported to a landfill elsewhere, and RAW Plastics is actually doing the work of recycling and using their platform to advocate for recycling reform.

We had a short worship service that included a commissioning of all who were gathered to the work of creation care.

Here are some of the ideas we came up with but did not use:

Jay LaNunziata is a sacred storyteller and the Director of Christian Formation at St. Paul's Episcopal Church in Greenville, NC. They are a graduate of Mid-Atlantic Christian University of Elizabeth City, NC. They enjoy geocaching, baking, obsessing over Star Trek lore, and artisan coffee. View all posts by Jay